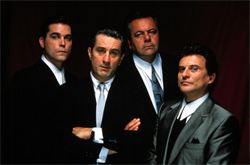 It’s the 25th Anniversary for ‘Goodfellas’  a mobster movie by Martin Scorsese which has become a classic gangster movie. It is being honored on the closing night of the Tribeca Film Festival this year. I went to celebrate the 25th anniversary in Neirs Pub in Woodhaven Queens. WHat a great old pub and good times. Goodfellas focuses on Henry Hill  the Wiseguy who ends up in the witness protection program to avoid being whacked or sent to a long prison term. The movie has no holds barred with some great performances  by Robert De Niro, Joe Pesci (who won an Oscar for best supporting actor), Ray Liotta. The movie is based on the Lufthansa Heist 1978 at JFK airport in NYC which is still being investigated today. Take some time grab a beer and watch one of the best gangster movies of all time. Then come on a gangster mob tour and learn some more about La Cosa Nostra.   SEE YAS IN THE STREETS!!!!